When Valletta was being built, the Order of St John had ensured that its population would have its essential supply of water. All houses, palaces, convents and churches had their own wells dug out underneath their edifices. Numerous large collective cisterns were also dug out at various locations inside the city walls. This notwithstanding, over the years, due to the ever increasing population, supply was not keeping up with consumption. The Grand Master of the time, Alof de Wignacourt, (r. 1601-1622), decided to raise funds, so that potable water would be harnessed from the natural springs around the higher and fertile grounds of Rabat and Mdina and be conducted to Valletta. In 1610, an Italian civil engineer, the Jesuit, Natale Tomasucci, was brought over to Malta to devise and work on this water channelling system. However, after some while the project stalled due to insurmountable technical problems. 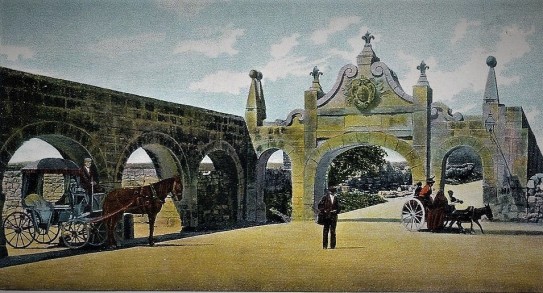 Another engineer, Bontadino Bontadini was called in. He advocated the use of a new type of cementing material that would withstand the pressure of flowing water. This cement contained pozzolana, a composite of volcanic ash that was imported from Pozzuoli, (hence the name), near Naples. For part of the distance where the gradiant of the land was downhill, the water canal ran underground. When reaching the outskirts of Ħ’Attard a series of arches were set up to support the channelling to flow further. This structure extended several hundred metres in all. Further channelling conducted the water supply, all the way to Floriana and Valletta. The total distance that the aqueduct covered was twelve kilometres.

On April 21 of 1616, Grand Master Alof de Wignacourt ceremoniously inaugurated the project that was meant to sustain human life and commerce inside Malta’s capital. The whole project amounted to 400,000 scudi (at that time, one scudo was worth an average of a month’s salary paid to an unskilled worker.)

On April 4 1807, a mutiny broke out amongst the Froberg Regiment, stationed at Fort Ricasoli, Kalkara.  The Froberg Regiment had an ill reputation and was despised by both the Maltese who came in contact with it and the British army alike for its unruly behaviour. The regiment consisted of, a motley of Greek, Albanian, Slavic and Turkish conscripts. The regiment had been originally formed under the German Count Froberg, who was really a French royalist called, Gustave de Montjoie. The regiment was run by mostly German officers.

It just happened that in one particular instance, the regiment’s drummer boy was severely punished by one of the officers. Two of the regiment’s soldiers could not stomach this and turned on this senior officer and hacked him to death. This act sparked off a mutiny of most of the soldiers (some 200 men stationed in Fort Ricasoli) who subsequently locked themselves up and turn their guns towards Valletta. A Russian flag was hoisted on the fort to demonstrate the soldiers’ anger and rebuke to British military authority.

In retaliation, the British command on the island besieged the rebellious garrison inside the fort, so that the rebels would be forced to surrender once their provisions ran out. After four days most of the mutineers surrendered, but eight others, chose to blow up the gunpowder magazine. Finally, on April 12, a British unit stormed the fort in a surprise dawn attack and some 30 men were arrested and thrown to jail to face trial. A court martial followed soon after, and all mutineers were sentenced to death. The execution was held in Floriana, at a place, usually reserved for the gallows. The mutineers were executed in groups of five, whereby the first group condemned were hung by their own comrades, whilst the last group were executed by a military firing squad. After this incident the Froberg Regiment was disbanded.

Malta will this year will be commemorating the 78th anniversary of the bestowment of the George Cross by King George VI. This honour was bestowed upon the Maltese nation together with a citation from Buckingham Palace, on 15 April 1942. This honour served to acknowledge the tenacity and heroism shown by the Maltese during World War II, when the islands’ resilience was being severely tested by the enemy. At the time, fuel resources and food rations in Malta were at their lowest ebb. The population was on the brink of starvation and rumours had it that the army was deliberating an armistice. Ammunition was running out, so much so, that the Anti-Aircraft (AA) guns were permitted to fire only a few rounds per day.

The citation issued runs as follows: “To honour her brave people I award the George Cross to the Island Fortress of Malta to bear witness to a heroism and devotion that will long be famous in history.”

Indeed, in April of 1942, Malta was taking a terrible beating as the Luftwaffe incessantly carried out sorties from its base in Sicily in an attempt to neutralise the British forces in Malta. It is to be said that the British Air Force based on Malta was a source of constant harassment to the naval supplies that were scurried from Sicily to Rommel’s North African army.

The medal was carried to Malta by the newly installed Governor Viscount Lord Gort. During his flight to Malta, he constantly kept the honorary medal in his pocket! While the citation had been delivered on April 15, the actual presentation ceremony in Malta was held months later, on Sunday, September 13. By then the worst of the enemy attacks was over. On that day, at around 9 am, a  crowd of officers in uniform, Maltese civilians, together with a sizeable number of prelates gathered in St George’s Square in order to witness the ceremony. The Governor, presented the medal to Maltese Chief Justice, Sir George Borg, who proudly received it on behalf of the Maltese nation.

This honour is not lost on the Maltese people as the emblem of the medal remains consitutionally and prominently displayed on Malta’s national flag.