In 1522 the Order of St. John was defeated and expelled from Rhodes by Suleiman the Magnificent’s Ottoman forces.  For eight years the Order was to stay in Viterbo and other Italian towns, whilst the Grand Master and his retinue lobbied in various courts of Europe to find a suitable country where to settle down, hopefully temporarily while seeking to retake Rhodes.

It was Charles V of Spain, who finally decided to grant Malta, one of his possessions, to the Order of St John. Thus, Grand Master L’Isle Adam and his knights landed on Malta’s shores on 26th October, 1530. The Order took up residence in the small maritime castle of St Angelo, located at the north-western tip of the harbout town of Birgu. In 1571, the adminstration of the Order shifted to the new capital, Valletta.

Throughout their stay on Malta, the Knights of St John, evolved from humble monks, as they were known to be in Jerusalem, to a more aristocratic and authoritarian regime. They retained the a quasi-sovereignity status on Malta until 1798 when the Order was expelled from the island by Napoleon.

On October 7, 1571, in the Greek gulf of Patras, near Lepanto, a Greek town today known as Navpaktos, an epic sea battle took place between the fleet of the Papal forces, known as the Holy League, and that of the Ottoman Sultanate.

The casus belli was the Turkish dominion of Cyprus, once a Christian territory and the imprisonment of the Venetian troops thereat. Several Christian powers of the Mediterranean, namely, Spain (including the kingdom of Naples), the Habsburg Monarchy, Venice, Genoa, and the duchies of Savoy, Tuscany and Urbino united to liberate Cyprus from the Ottoman dominion. Under the patronage of the Pope, and the financially supported of Philip II of Spain, while aided with maritime units from other Christian states the Holy League gathered in Messina 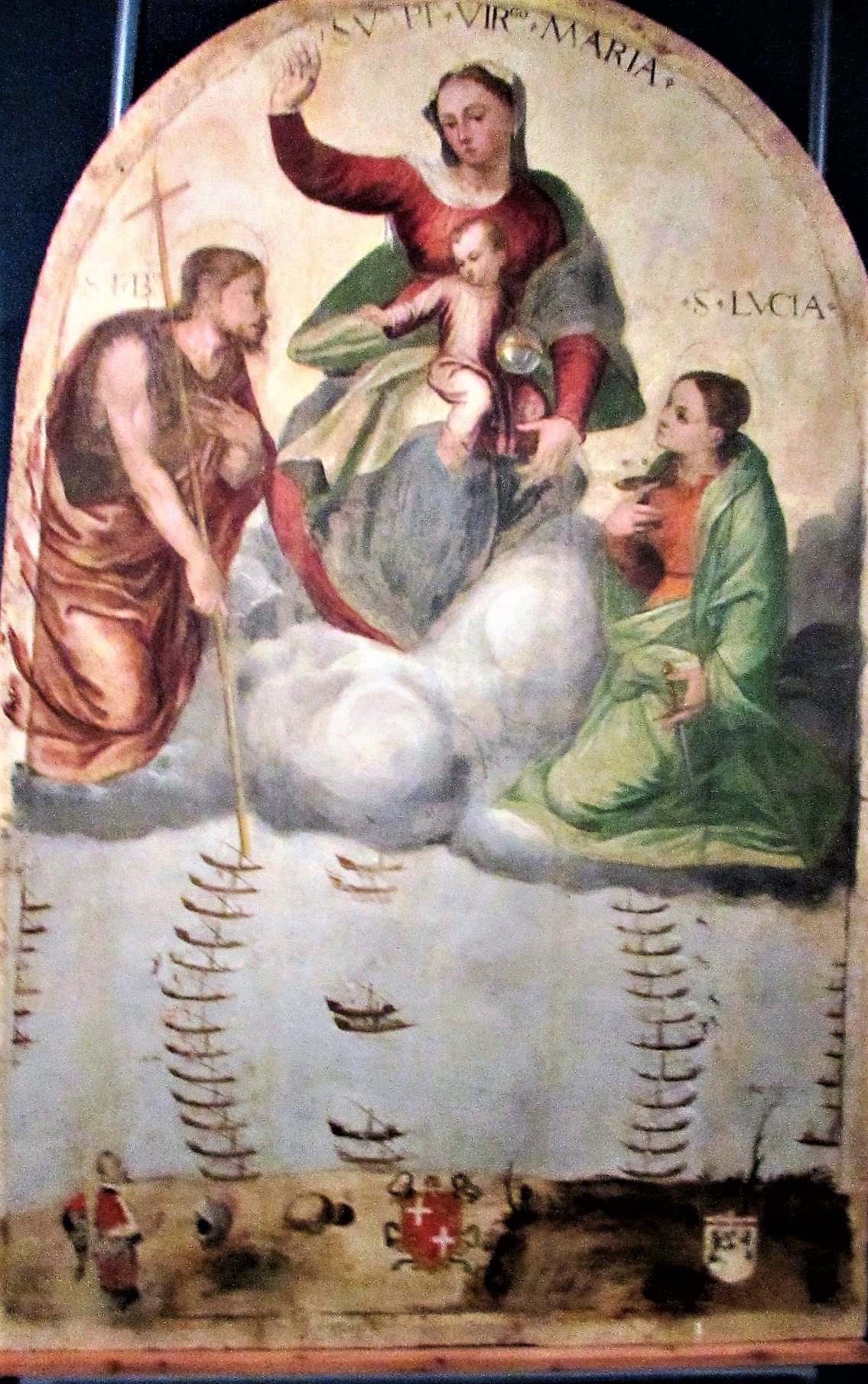 and set sail towards to battle the enemy on September 16. The Christian fleet was made up of 206 vessels of various types and were headed by the Spanish commander, Don Juan of Austria. The Order of St John sent three of its galleys as its contribution to the Christian powers. The crew and soldiers on the Holy League totalled  some 70,000. On October 6 they reached the Gulf of Corinth. On October 7, the fleet enterred the Gulf of Patras where they encountered the Ottoman fleet that carried 84,000 troops and crew on some 300 Turkish vessels.  The battle that commenced early on in the day raged on for five hours, but finally the Christian fleet emerged victorious. The Turks had lost some 15,000 souls, double the loss of the Christian forces. Besides, some 80 Ottoman vessels had been destroyed, while 150 were captured.

To commemorate this famous victory, Pope Pius V celebrated this successful outcome yearly by establishing the feast day of Our Lady of Victory as well as the Holy Rosary, a prayer recited to honour the Madonna who had heeded his prayers and turned the winds of war in favour of the Holy League.

Nothwithstanding this crushing defeat of the Turkish fleet,  the victory was seemingly an ephemeral one as within a couple of years the Turks regained Cyprus (1573) and even took over Tunis (1574), thus re-establishing their hegemony over its previous territory. Yet this battle is considered the greatest sea battle ever recorded in early modern times.

The Arrival in The Grand harbour of the Corona Ottomana – 1760 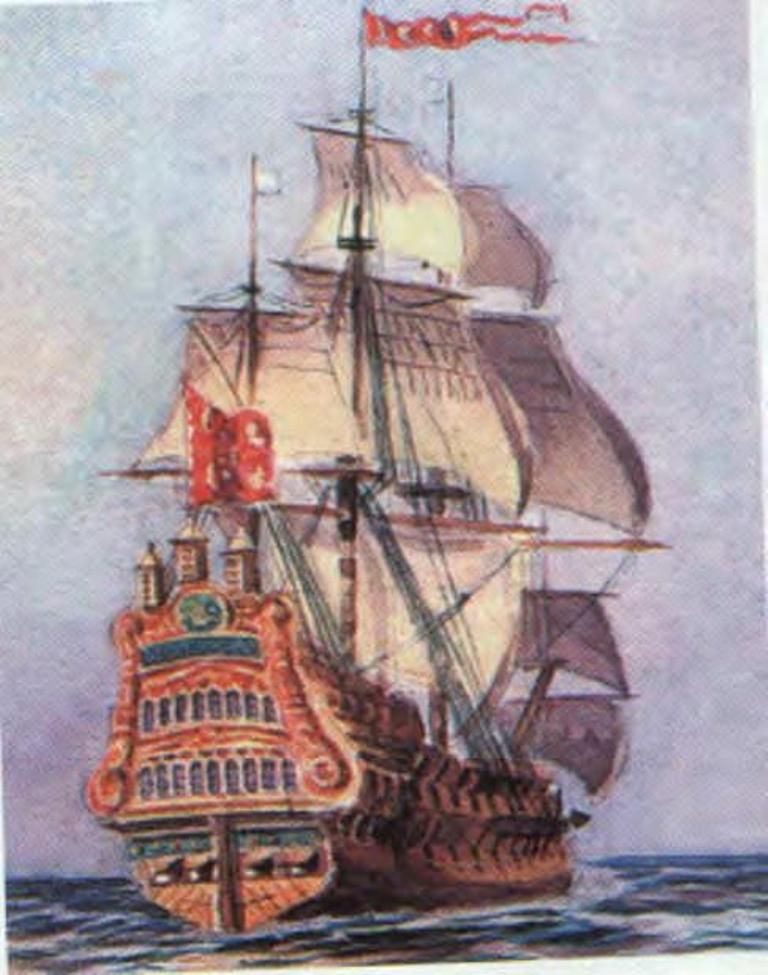 On 19th September 1760, the Corona Ottomana, a powerful vessel that had just been added to the Ottoman fleet, was sailing in the Greek seas with some 760 crew on board.  Around 80 of these were captured slaves, of whom some were Maltese.

When stopping at the port of Stanchio, the Pasha Aplin Sherin in charge of the vessel, went ashore accompanied by a sizeable contingent.  The galley slaves took advantage of this situation and overpowered the rest of the crew who had stayed on board.  The rebels immediately hauled anchors aweigh and headed towards Malta where they reached port on October 6.

Grand Master Manoel Pinto de Fonseca welcomed this unexpected prize with open arms.  He decided to rehaul the ship, spending some 30,000 scudi to adapt the vessel and include it to the Order’s small squadron. The ship was baptised as the Santissimo Salvatore.

The Turkish Sultan Mustafa III, was furious at the Order’s manoevres.  He threatened to attack the Maltese islands but then opted to seek the intervention  of his French ally Louis XV, who like many other French monarchs before and after him, bore great influence on the Order of St John.  Yet, the Grand Master stood firm in his decision to retain the Turkish vessel.  A solution was finally reached when Louis XV ended up buying the Corona Ottomana from the Order for 834,800 livres so that he would return her to the Sultan.

Following the uprising of the Maltese on 2nd September 1798, the French were forced to retreat behind the fortifications of the Grand Harbour, that is, Valletta, Fort Manoel and the Three Cities.  From then on the Maltese militias staged a long drawn blockade against the French. The Maltese militias kept harrassing the French troops by daily cannon fire from the countryside, shooting at anyone who dared show his face above the fortification lines.

In order to boost the morale of the French troops, General Vaubois decided that he would let his troops storm out of the harbour towns on a surprise attack to pillage one of the villages. The chosen location was Ħaż-Żabbar which lies Southeast of the Notre Dame Gate, part of the Cottonera Lines. To do this, a ruse was set up, whereby a contingent from Valletta would march towards Tas-Samra battery (in the area today known as Ħamrun).  Whilst feigning this attack, a raid was unleashed on the tiny town of Ħaż-Żabbar, located a mere three hundred metres away from the southern side of the Cottonera fortifications. The troops were therefore to exit from the Notre Dame Gate, known also as Bieb is-Sultan.

At dawn of October 5, hundreds of French soldiers marched out on foot and entered Żabbar from the then main street, known as Tal-Biċċieni. The troops reached the centre of the town in a matter of minutes without meeting any resistance at all. The village seemed to be deserted.  But not for long – suddenly, all hell broke loose as the Maltese not only were they not taken unawares, but seemed to be well informed and prepared for such a raid.

The French troops were pelted with stones from the roof tops, while armed men fired at troops in the street.  Out of nowhere four cannons were suddenly trained on the ambushed troops close to the junction leading to the Tal-Grazzja Church. This surprise attack cost the French troops dearly, and more than 40 soldiers were killed while some 300 others were wounded. The French troops beat a fast retreat back to the Cottonera Fortifications.

This was the only time that the French ventured out of their fortifications during the two year blockade.  The lesson had been learned, the Maltese insurgents were no push-over and therefore the French spent the rest of their stay in Malta inside the fortified towns throughout the blockade until September 4, 1800.

Please clcik here to know more about other publications by same author: