In April 1942,  the historic clock tower of Birgu (L-Arloġġ tal-Birgu), sustained heavy and irreparable damage during heavy bombing raids by enemy aircraft. What remained of it had to be dismantled never to be rebuilt. This unique landmark served as a watch-out post wherefrom warnings were sounded for the people of Birgu to flee from the approaching landing force. It has long been held that the high turret at the top of the tower served also as a vantage point wherefrom Grandmaster De Valette could monitor the Turkish enemy that surrounded the Birgu during the Great Siege of 1565.

The origin and structure of the tower

There are conflicting claims as to the tower’s date of origin. Some maintain that it goes back to 1549, as this date was once inscribed on its walls. This would place the tower’s construction to the early decades of the Order of St John’s stay in Malta, when the knights were then residing in Birgu. However, there is also mention of an alarm bell dated to 1504 that was placed on the turret of this edifice. It goes to follow that if the bell was manufactured purposely for this tower, then the tower must date to 1504 or even earlier. The bell was manufactured in a foundry in Messina by someone known as Carbuni, as the bell bore the following Latin words:

The tower was built to a height of some 40 metres and was composed of five storeys, thus rising well above the town houses. Its exterior walls measured six metres on each of its four sides. The entrance to the tower faced West, that is, towards l-Isla. On the fourth floor, the tower had a balustrade that ran on all four sides of the building. This was supported by a series of corbels (M. saljaturi) each spaced from one another at a certain distance. Another smaller balcony was added on the second floor, this time fronting only the western facade.

The purpose of the watch tower 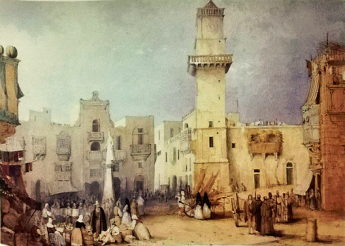 It is intriguing to discover why such a tall tower, was required to be built in the heart of Birgu. Nowhere else on the Maltese islands did such a tower exist. Of course in the case of Mdina, such a high standing tower would have been superfluous, as Mdina itself is located on high grounds that hold a commanding view of the surrounding landscape. The tower in Birgu, positioned as it was on low grounds in the central piazza of the town, may have served various purposes. The most obvious reason for the tower was to serve as a watch-out post that warned the town folk of Birgu of any approaching enemy vessels on the horizon or else of corsairs that had disembarked elsewhere and were on their way to Birgu from the hinterland. One should bear in mind that a year prior to 1549, the date incised on the tower, there had been a corsair incursion on Maltese shores. Were we to opt for the earlier date of 1504, two similar incursions are recorded, one in 1487 when Birgu was sacked by  the Turks and another in 1488. Any one of these landings might have aroused the need to build the watchtower in Birgu.

However, one must also keep in mind that Birgu had since the Middle Ages been provided with good surveillance and protection by the keepers of Fort St Angelo. The fort, located on a higher ground at the tip of the promontory must have served its purpose well without the need to build a watch-out post in Birgu. The population of this maritime town, had for hundreds of years been living under the jurisdiction of the Castellan of the fort, and so by default would have gained considerable protection by the garrison stationed there. The same situation existed when the Grand Master and his retinue of Knights took over the fort.

One will therefore conclude that the watchtower, positioned as it was on a low lying part of the town, may have best served to relay communication from St Angelo to the town folk, whenever an emergency dictated. Hence the alarm bell on the turret of the tower. This would have been useful as a signal to inform the inhabitants of Birgu and those of the vicinity to quickly seek shelter inside the fort.

The Order’s chronicler, Francesco Balbi da Coreggio (1505 – 1589) informs us that the alarm bell was used during the Great Siege of 1565. He claims that the bell was nicknamed in-Newwieħa, implying that the pealing of this bell was such that sounded a sorrowful tone, (newwaħ in Maltese means to weep as in lamentation). One must also question this statement as a more appropriate term in Maltese existed for an alarm bell, nuffara, (naffar means to warn or to scare someone away). Balbi also mentions that the tower had a clock.

When in 1571 the Order moved away from Birgu to take up residence in Valletta, the tower was handed over to a family from Għaxaq to live in. However, it is also believed that the top storeys of the tower, including the balcony and roof remained public property, implying that the original purpose for the tower to act as a watch-out post and harbinger was still maintained.

A new  clock is installed 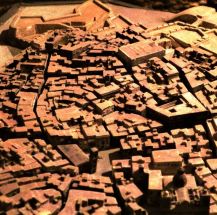 In 1629, a mechanised clock that funcioned with a pendulum was installed. The mechanism supported two dials, located on two sides of the fifth floor, one facing West and the other facing South. The clock’s dials displayed Roman numerals. The need for such a mechanised clock in Birgu must have been considered as important, given that the town served as a maritime hub where life tended to be more hectic and a precise schedule of duties was a must. This might explain why there were two dials, one facing the Birgu marina and L-Isla and one facing the town square.

Apparently, this new clock was commissioned by the governor of the town and its installation was supported by the Jurats of the Università (local council) of Birgu because the names of all these were inscribed on a commemorative tablet. The inscription reads as follows:

Which translates into English thus:

‘During the happy reign of Grandmaster Fra Antonio De Paule, Fra Alex De Verax, Knight of the Venerable Langue of Auvergne and Governor of Vittoriosa, well known for his civil and military activities, commissioned this noble work assisted by the citizens, Giovanni Mallia, Giovanni Testaferrata, Cristoforo Menna and Leonardo Burlò in the year of our  Lord, 1629’. 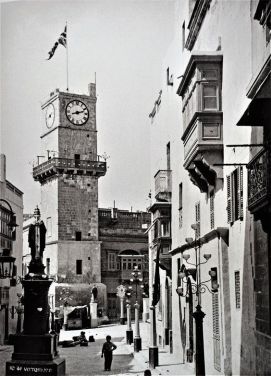 A person was entrusted by the Università to tend to the clock’s daily operation. For his troubles the person in charge was paid eleven scudi yearly. In 1798, a request by Benedetto Cutajar was made for him to be paid for arrears due for his service. Cutajar said he had been in charge of the clock’s upkeep for the last 45 years. This person was claiming payment of 30 scudi. Thirty scudi was back then a pretty normal yearly salary for an unskilled worker.

The clock continued to function regularly, well into the 19th  and 20th century until that fateful month of April 1942. Indeed, up to 1801, the town square was officially known as Piazza dell’ Orologio. The British made good use of the tower for observation purposes and to measure wind velocity. A British flag is seen hoisted on the turret in one of the photos that were taken in the 19th century. Early in the 20th century, the ground floor and first floor were used as a shop, as well as a place of habitation.

The Destruction of the Clock-tower 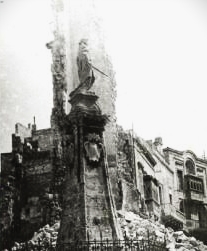 On April 4, 1942, the clock tower, was partially damaged when a bomb exploded in its vicinity. On the 11th of the same month part of the tower collapsed. The coup de grace came on April 27, when during another air raid, what remained of the tower was blasted down almost completely. After the war, in October of 1944, instead of endeavouring to reconstruct the tower to its former glory, the remaining structure was dismantled completely.

Fortunately, the clock’s bronze hands that had been recovered from the wreckage during the war were taken away for safe keeping. One of them is on display in the small parish museum of Birgu. The other rusty metal hand was presented to the Museum Authorities (today known as Heritage Malta), and as of 1983, was exhibited inside the Inquisitors Palace in Birgu.