The siege that the Ottoman armies had commenced on Malta six months earlier, for some time seemed to be going downhill. The Turkish and North African armies had suffered heavy losses not only from deaths and injuries but also from disease and low morale. On the other hand the 250 knights and their Maltese subjects were tenaciously awaiting the promised military relief force to come to be sent from Sicily.

Finally, Don Garcia de Toledo, Vice Roy of Sicily, had mustered some 10,000 men and on September 6, these had reached Malta’s shores.  On September 8, the troops disembarked on the shores of Ċirkewwa and Armier and marched towards Mdina where they were welcomed by the Maltese defenders. The Turks got wind of this replenishment of troops and believing in a bigger number than it really was, a good number of galleys had slipped away silently during the night to return to their country of origin.

The Ottoman General Mustafa Paxa realised that his hopes to win the siege were now crushed. Thus, he gave orders for the troops encamped in the Bormla area to retreat to the Sciberras peninsula, so that they would be ready to board the galleys in Marsamxett. While the loading of all military equipment on board all vessels was in progress he opted to make a last stand away from his position. He thus marched his men towards the hilly grounds of Naxxar to dare the Sicilian troops to a battle. During the battle that ensued, the Turks were soon routed and according to the chronicler of the siege a grand massacre of some 2000 Turkish soldiers took place. Those who survived bolted for the galleys awaiting them and set sail.

The outcome of the Great Siege resulted in some 33,000 soldiers dead on the Ottoman side and some 6,000 soldiers on the Christian side. The siege proved to be a great victory not only for the Order and the Maltese, but also served as a moral victory for many Christan states who felt less intimidated, now that the Turkish military forces were returning home to lick their wounds. 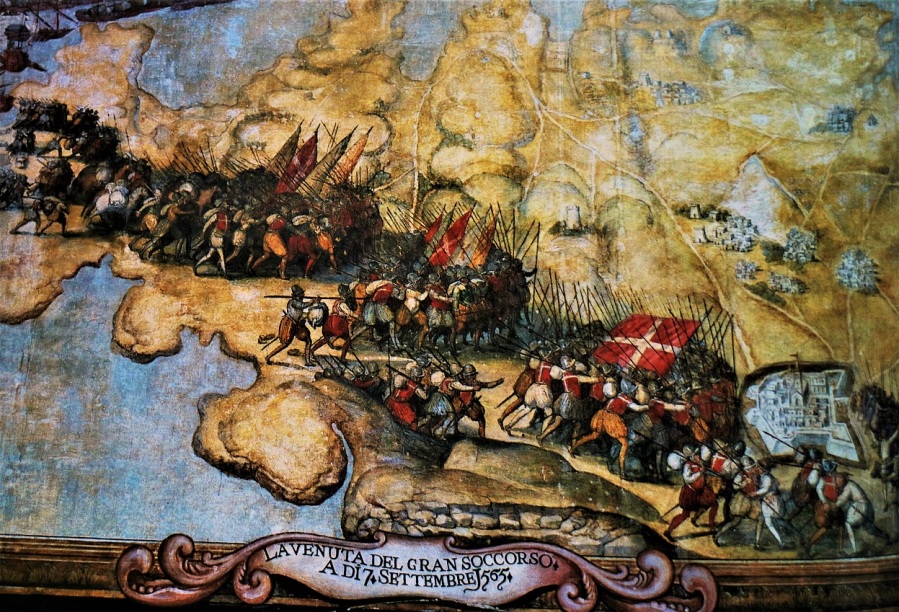 The French troops had landed in Malta on June 10, 1798.  In the span of a couple months the tumultuous administrative changeover and the introduction of new laws had rubbed the Maltese population the wrong way. Matters came to a head almost three months later on September 2.

The spark that lit the flame occurred on that Sunday, in Rabat.  On this day the people of Rabat were celebrating the feast of The Madonna Taċ-Ċintura, in and around the small Augustinian church, dedicated to St Mark, situated as it was right opposite the main gate of Mdina.

The French had on that day endeavoured to loot precious objects from the Church of Ta’ Ġieżu in Rabat, but the Maltese resisted this audacious behaviour. Failing that, the French troops entered the Carmelite church inside Mdina to auction off the silverware and other valuables inside. The Maltese outside Mdina, got heed of what was happening and promptly protested vehemently with the French officers who were inside the church.

Following this incident the situation quietened down. However, several French officers garrisoning Mdina took it upon themselves to venture out of the town’s gate to take stock of the situation in Rabat. These officers were soon checked by the Rabtin and in a matter of minutes three of them were lynched by the crowd and murdered.

This episode was to prove the rallying call for the Maltese to set up rebel forces against the French. In a matter of hours the ill-armed Maltese insurgents stormed Mdina where French garrison was overpowered. The major French forces inside Valletta and the Three Cities hurriedly closed the gates of their fortifications and blocked themselves in the harbour towns. Twenty one village militias were hurriedly set up. Yet, alone they were no match for the better equipped and well trained French troops behind the fortifications. The Maltese then asked the King of the Two Sicilies to send troops to their aid. Ferdinand delegated this task to his British friend Horatio Nelson. It took a 22 month naval blockade by the British Navy aided with Maltese on land to press the French into final surrender. When the day of capitulation finally arrived it was the British General Pigot who met the French General Vaubois and Admiral Villeneuve on 5th September to capitulate and leave the islands with military honours. The British flag was raised on Malta’s fortification. Yet, there was no sign of either the Bourbon flag of the King of Naples, nor that of the Maltese. Thus began a new era, that of British rule that lasted for 164 years.

Operation Husky, the code name for the invasion of Sicily by thousands of Allied troops was set forth from Malta and North Africa in Sicily started on July 9-10, 1943.  During this operation the allies made rapid progress in their military campaign so that by the end of August, not only had they obtained control of Sicily but also crossed the Straits of Messina to head towards Rome. The surrender of Italy to the Allied Forces occurred on September 3, 1943.  This armistice was however, officially made public on September 8.

By this date, Italy’s army and Air Force had virtually disintegrated. The Allies’ main preocupation was to ensure that the Italian Navy, some 200 assets in all, would not fall into German hands.  There was also the possibility that some of the Italian Navy commanders might fight back or else scuttle their ships. Thus, the Italian warships on Italy’s west coast, mostly at La Spezia and Genoa, were ordered to sail for North Africa. Those ships in the port of Taranto were to sail for Malta and anchor in St Paul’s Bay were they were to stay until the war came to an end in 1945.

Following two world wars and two Pyrrhic victories, Britain had to tend to its heavily ailing economy. The disadvantages for Britain to retain its colonies were by then far outweighing any advantages. In 1955-6, Dom Mintoff had bargained for a possible integration with Britain, but soon, both Britain and Malta had a change of heart.  A ‘Break with Britain’ resolution was announced by Mintoff. Now, both the Labour Party as well as the Nationalist Party were sensing and demanding an impending imminent date for independence.

In 1962, with the Nationalist Party in government, an official proposal for independence was presented to Britain. This request was immediately accepted as Britain’s policy about its colonies had taken a decisive turn. Indeed, many other colonies, some 12 in all were in the process of making the same demands.

Talks started in earnest with Duncan Sandys, Secretary of State for the Colonies, to seek terms for independence. The main issues discussed were those related to a smooth rundown of the military base, and a suitable new constituition for Mata to make headway politically and in a civil manner in the years to follow. A referendum was held on this issue and eventually Malta obtained its independence on September 21.

At midnight of September 20, a ceremony was held, set against the backdrop of the Lintorn military barracks in Floriana, whereby the British Flag was lowered down to make way for the Maltese flag to be hoisted instead. From now on, a democratically elected Maltese government was to lead the nation to seek its own fortunes.

Know more about MM’s other publications by clicking here: https://kliemustorja.com/informazzjoni-dwar-pubblikazzjonijiet-ohra-tal-istess-awtur/