During the 19th century

The British hoisted the Union Jack for the first time in Malta at Bieb il-Bombi, Floriana, once the French were forced into surrender on the September 5, 1800. The capitulation of the French, with full military honours, was signed by General Pigot and Captain George Martin, for the British side, and General Vaubois and Admiral Villeneuve, for the French side. It is very telling that no Maltese official from the insurgents’ side that had fought the French for two whole years was present, let alone allowed to be a signatory of this surrender (B. Blouet, 1981). Similarly this  act was of great regret to Ferdinand, King of the Two Sicilies, because this monarch claimed Malta as his rightful possession through royal lineage that could be retraced to Charles V of Spain. It had been Charles V who ceded Malta to the Order of St John in 1524. A while after the Maltese blockaded the French in Valletta, the insurgents had pleaded with Ferdinand to help them oust the French troops from Malta. Because Ferdinand was unable to do so he had asked Admiral Horatio Nelson to assist the Maltese with their military blockade in his stead.

Following the liberation of Malta, Nelson was initially undecided as to whether he should retain the Maltese islands. At the time, he believed that Malta was not worth keeping, because the islands were located too far away from France and so the British navy would be unable to keep any effective surveillance on the French fleet based as it was in the ports of Toulon and Marseille. Moreover, Nelson was aware that the Maltese were divided in their allegiances and their views as to who they should allow to take possession of Malta. Some of the Maltese actually desired to see the Order of St. John return to Malta as the legitimate rulers. There were others who were staunch sympathisers of the French Republican ideals. The Maltese leaders who had taken up

arms against the French opted for the British to stay because they felt that they were the best guarantee to keep the French away. Those who held such views wanted to maintain such protection under a British administration while envisaging a degree of political liberty vested among their own Maltese leaders. These aspirations were emphatically stated by the Maltese leaders’ ‘Declaration of Rights’ that they dispatched to King George III, on June 15th June 1802. This declaration followed the signing of the Treaty of Amien on 25th March because Article 10 of the Treaty stated that Malta was to be transferred back to the Order of St John and was to be provided guarantees by Austria, Britain, France, Russia, Spain and Prussia. In their declaration the Maltese implored the king that they would rather remain as a British ‘protectorate’ while being conceded a Consiglio Popolare (B. Blouet 1981).

Meanwhile, in London, many began to realize how strategically important Malta would prove, especially as an entrepôt for merchandise when ships plied the Mediterranean Sea to reach Egypt and beyond. With Malta under British hands the Grand Harbour was to become a hub of maritime activity. Indeed, in the following years, trade started to flourish. It is estimated that in 1812 alone, some 3000 ships entered Malta’s ports. Unfortunately, with incremental trade, in April of 1813, an epidemic of the deadly bubonic plague broke out in Malta. This eventually led to the death of some 4,600 of all those afflicted. Poverty and misery fell all over the archipelago because now, all commercial activity was adversely affected and no vessels dared to anchor inside Malta’s harbours lest the crew would contract the disease.

Finally, in the Treaty of Paris of 1814, England formally declared that it would keep Malta to be administered as a ‘Crown Colony’. Thus began a new era, where Malta became a valid haven and a stepping stone to a great part of the ever-growing maritime activities in the Mediterranean. Hundreds of soldiers from different regiments were stationed in Malta, and with them a sizeable retinue of administrators and their families. Thousands of sailors regularly landed on Malta’s shores as their ships laid anchor in the Grand Harbour for a while. Over the years, Maltese regiments were created to become part of the military establishment. Hundreds of Maltese were increasingly being employed as ancillaries with the British Navy. This apart from the hundreds of those involved on shore who provided logistical supplies and repairs necessary to keep the ships seaworthy. Consequently, artisans, but also farmers and herdsmen, especially those in the Cottonera towns and Valletta, started to thrive financially from the services they provided to the British fleet.

Relationship between the British and the Maltese

When in 1812 a Royal Commission was sent to Malta to study the local situation, the commissioners claimed that the Maltese were unfit to be part of the political system of the islands. Thus they recommended that the Consiglio Popolare desired by the Maltese should not be established. Such a council might also prove to be a thorn in the side of the administrators in that it might well whip up anti-British sentiments.

Nevertheless, the 19th century all High Commissioners, Governors, Lieutenant Governors that were posted in Malta always endeavoured as much as they could to maintain good relations with the Maltese in general, and constantly showed due respect towards the Maltese bishops, the clergy and the Roman Catholic religion that the population so faithfully practised. They knew that the clergy provided not only spiritual leadership, but was also able to influence the populace and control the sympathies of the population towards the British. Thus, the British authorities ensured that the newly elected bishops were to be Maltese and to their approval. They even consulted with the Vatican so that the Maltese Church would break away from the authority of the Diocese of Palermo. The separation of the two dioceses took place in 1831.

Yet, over the years not everyone was content with the way the Maltese wwere being treated. Oddly enough, the first to show such dissent was a certain William Eton who was the superintendent of the Quarantine Harbour at the Lazzaretto. This British official had fronted the Maltese cause for formal participation in the administration of the islands. Later, as from the third decade onwards George Mitrovich, a Maltese businessman, and the Maltese nobleman Camillo Sciberras, a man with great experience in the French military, started their own endeavours to speak out for the political aspirations of the Maltese. Together with others the two set up the Comitato Generale Maltese to seek local participation in the administration of the Maltese islands.

After many representations from this committee, both locally as well as in London, in 1835, a select group of prominent Maltese people, were appointed to sit on an advisory committee to the Governor. Yet, these held no authoritative powers whatsoever. In 1836, a Royal Commission was sent from London to study the general situation in Malta. However, the political status remained unchanged up until 1849.

Then, in 1849, after various manifestations of discontent, the British government granted a new constitution that allowed for a new Government Council to discuss administrative matters. This council was made up of eighteen members, of whom eight were to be democratically elected by a select franchise made up of just 3,700 voters (D. Fenech 2021). Those that were elected hailed from various classes of society, namely, the nobility, the clergy, the business community and other prominent people who possessed landed property. The ten other members were chosen by the Governor himself, thus, the ex officio members were in a majority and could outvote the elected members. Amongst these selected members there was the Lieutenant Governor, in command of the British armed forces in Malta.

In spite of this new development in Malta’s political sphere, the standard of living of the Maltese was to remain a dire one indeed. Malta’s commerce was all tied up to the presence of the British troops and the British Royal Navy and there were little viable commercial options except agriculture or else emigration to the North African countries. The economic activities would surge and ebb according to the presence or lack of the Royal Navy in Maltese harbours. This presence would increase substantially whenever there were any signs of conflict in the Mediterranean that affected Britain’s geopolitical interests. Whenever such situations arose, thousands of British troops would land in Malta in preparation for any intervention required elsewhere. The Crimean War (1854 – 1856) was such an example when Malta served as an outpost, a forward station of sorts, and thus trade flourished for a couple of years as never before.

In 1869, the Suez Canal was opened, and this increased shipping in the Mediterranean. Now, Malta obtained a more important strategic role because many vessels, mainly those powered with coal, stopped for bunkering before continuing on their way to their given destination. In 1880 the tonnage of vessels that entered Malta had increased to around 5 million from 1.5 million in 1865. This tonnage was equivalent to over 2,000 sailing vessels and 3000 steam ships.

In 1877, another Royal Commission was sent to Malta to tackle the administrative, commercial and education issues that Malta was beset with. Among other things, the commissioners stressed that one of the best ways that the Maltese could improve their lot was by upgrading the education system. For this to happen it was necessary that the English language be given more prominence over Italian, especially in elementary schools. This was a valid argument because with a sound knowledge of the English 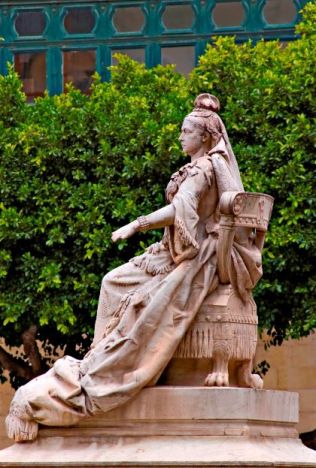 language one would stand to gain a higher post in the administrative sector. However, this recommendation found great resistance by many representatives in the Legislative Council. A long winded dispute arose and the councillors soon split into two opposing factions, those in favour and those against the proposals related too education. The party that was in favour of such reforms was thus labelled the Reformisti. This was led by the progressive politician Sigisimondo Savona. Those who were against the proposed reforms were labelled as ‘Anti-reformisti‘. These were led by the conservative Fortunato Mizzi who staunchly believed that the Maltese nation was firmly bound to the Italian culture, and thus Italian must remain the predominant language in schools. These two factions eventually metamorphosed into two distinct but unofficial political parties. Savona’s party became known as the Partito Popolare and Mizzi’s as the Partito Nazionale. Alongside these there was another political figure, namely that of Count Gerald Strickland considered at the time to be an Imperialist and an ultra-progressive politician who in between 1889 – 1896  acted as Chief Secretary on the Council of Government.

In the elections of 1883, the representatives in the Council of Government were elected by as many as 10,000 voters. In 1887, the constitution was changed whereby the Council was made up of a majority of representatives who were to be elected by a wider franchise. Nevertheless, the Governor retained the right to veto laws as he saw fit, in case the Council’s majority votes were adverse to British interests. The 1887 Constitution continued to serve as a basis with which the Council worked for many years. Towards the final years of the century the opposing councillors got entangled in a series of issues which frequently brought into play the language question. The elected members chose to carry out a policy of ‘obstructionism’ over the officially appointed members (J.J. Cremona 1994).

Finally, in 1903 the situation proved too much for the Governor to bear. The Governor and the Secretary of the Colonies, Joe Chamberlain, decided to suspend the constitution and dissolve the council. A new constitution was introduced that was to regress the authority of the council members to the status that had existed in 1849. This meant that the Council now had only members who were hand picked by the Governor. The majority of Maltese politicians shied away from this state of affairs and boycotted the Council. Consequently, the Governor was to administer Malta in an autocratic manner until 1921.

SIGNIFICANT  DATES of the 19th CENTURY